My...... did it rain last night? I woke at 1.57am precisely to hear it thundering down, monsoon-like, on the roof (we are a chalet bungalow so there is a lot of roof in direct contact with the ceiling!) and I was still kept awake by the noise 25 minutes later. I wasn't sorry because my plot sorely needs it. 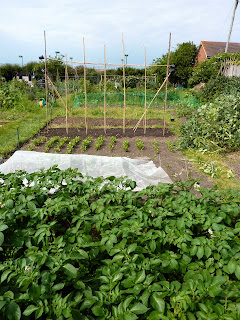 I took this photo on Friday after sowing some bean (actually "pea bean") seeds and installing the poles and watering the bed copiously.

I had also wanted to sow some peas in the next bed away fom the camera. I cleared and tilled that bed also on Friday, so it was ready (if a bit lumpy), but the peas looked so shrivelled in the packet, and they were in the last month of their "sow before" date, so I brought them home and soaked them til today. I actually sowed them at twice the density recommended on the packet. If they all come up, which I doubt, I will take every other one to have in salad as pea shoots.....yummy!!!The soil was so soft this afternoon that it was a doddle to put them in (anointed with petrol to foil the mice...!)

Early in the week I must go and net them because so many plotters have lost all their newly emerging pea and bean shoots to the rabbbits. Some said it was mice....! I can net against rabbits but if it is mice then I haven't a hope.

I think I forgot to note on here that I sowed some French beans for the freezer in the next bed behind the broad beans.

I am nearly ready to sigh with relief at having caught up. There is one more bed to clear, and then a load of weeding to do around the raspberries, gooseberry, and globe artichokes. I also want to clear all the weedy between-bed paths and restore them to bare earth. They are so much easier to cope with when I can just hoe them once a week, when I hoe the beds.

Everything at the plot looks happy to have had a soaking last night. 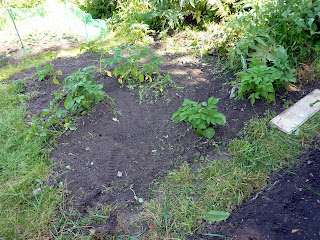 Perfect weather for me this morning. Not too hot, a slight NE wind, and the lovely shade afforded by the giant beech tree alongside my plot. I worked from 9.30 til Noon and as you can see by the pictures I took just before leaving, the plot was still in deep shade.

I decided to tackle the double width bed where I had spuds last year. As you can see there are lots of volunteers there. I always miss a few when digging up the crop. I haven't the heart to pull them out so I've left them. I pulled out most of the 18" tall weeds and then tilled it with my Wolf tiller, then raked all the weed debris around the plants in lieu of earthing up. In a day or two I will hoe again then put in some courgettes. 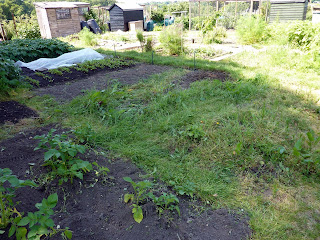 These are the last areas to tackle....then I'll feel like I've caught up. I've pulled out the tallest weeds, and am now loosening with a fork and pulling out the others. We are due some rain in the next day or so which will facilitate this!!!
These beds are destined for peas for the freezer.

In the backgroubd you can see Malcolm's new shed. It is a very sturdy biggish one (his B&Q one was a bit small and flimsy). He has stained it black and it has a beautiful red door now. 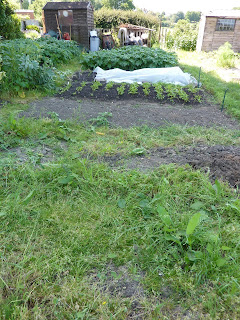 Another view of the same beds. Still lots to do....

My next stint at the plot looks like it'll be Sunday afternoon or Monday morning.. 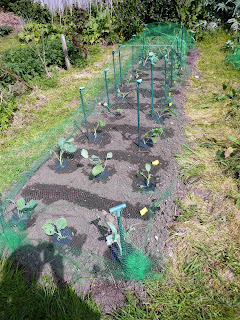 I don't cope very well with the heat, so this morning I fiddled about in the back garden for a while til it got hot, then spent the afternoon in our north facing back guestroom quilting. It is the coolest room in the house in summer but looks out across my back garden.
Then this evening I went to the plot when it became bearable. I have dripped and melted but done some useful work.

Here you can see the brassica bed which I planted up one day last week. After the fierce winds have had to keep replacing the cabbage collars everytime I have been near the plot. Today there were two missing. 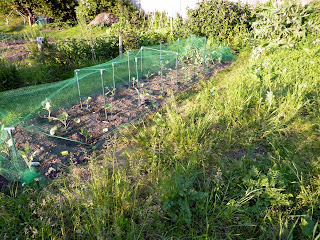 This evening they looked as though they are all happy and growing away.

The bed next to it is still awaiting attention this year. 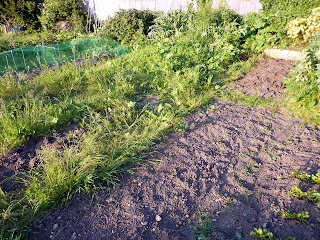 I did these beds this evening. After yesterday evening's thunderstorm and torrential rain (felt like a monsoon......very heavy and not at all cold) the soil was a dream to work. The bed in the background which is freshly cleared looks tiny but is in fact 9' x 3'6" 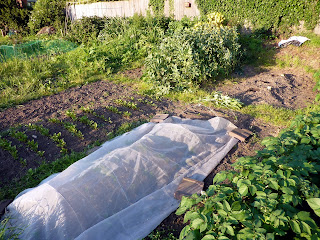 . i have a new pack of French beans to put in there when I have a minute.


I also hoed the beds seen here....the beetroot are looking good, and the courgette bed (back right) isn't showing any sign of life yet, but it is early days. The carrots under the environmesh are doing well. 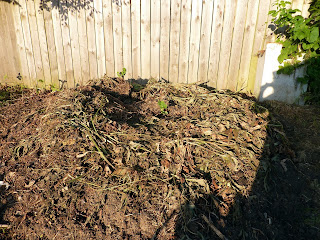 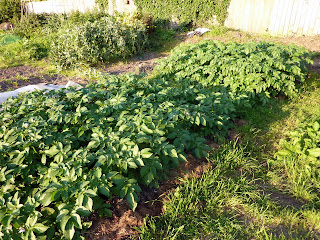 I picked a huge bag of broad beans....yummy! 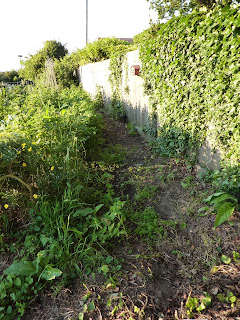 The back of the garden. The comfrey was all along here. I have put it here because I heard that it is good as a weed root barrier around a plot. Actually it is probably holding them my side at the moment...!!!
The raspberries are flourishing but could do with a good weeding soon.

So....I am still behind but am getting there. At home the kitchen garden looks better every day, and the front garden is next on the list. The dandelions in the front border are embarrassing!!!!

Time to water the tunnel...