Not a very interesting post....more for my own records than for entertainment...

And in modules in the tunnel
Beetroot "Boltardy"
Beetroot "Chioggia"

It was very pleasant out there as it is very sunny today, and the chilly wind (which is drying the soil at last) put me off being outside. So a lot was done but I didn't get cold!

We are undergoing quite a rainstorm at the moment so it was with great pleasure that I retreated to the polytunnel to start sowing the seeds that don't need heat. The noise of the rain on the taut plastic was pretty loud, but otherwise it was OK out there.....dry and windfree!

I sowed 2 rootrainer sets of Broad Bean "Sutton". (Does anyone else feel that these could be made of better quality plastic. I won't be buying any more of these as the inserts only last a couple of seasons before they become brittle and crack. They cost enough to buy, and the materials can only be a small part of their production costs. I might write and moan at them!)

Also sown.....
Celeriac "Monarch" in modules. I think I might bring them indoors onto a windowsill as I think they need it a bit warmer than the tunnel.
Shallot "Matador" seeds. Hoping to produce my own sets!
Cabbage "Earliest of All"
Brussels Sprout "Evesham Special".
------ditto-----"Red Rubine".
Also some Sweet Peas...."Mixed Spencer"
and "Wiltshire Ripple"

The seed sowing didn't take long, but the hunting for all the stuff that usually lives on the staging....(pencils, dibbers, scissors, pots, etc etc etc that I had tidied away in ordewr to re-organise the tunnel) seemed to take forever... 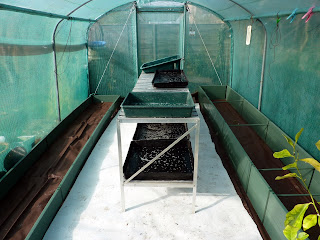 This morning I was at last able to install the new Link-a-bord beds that have been sitting in our hallway since I was given them for our Anniversary (38th) last September. Don't they look good.

Yesterday I had help to level the ground in the tunnel, and lay the weedstop fabric (Gardman....bought on special offer at Wisley last year.) I also laid (with help) some excess carpet down the middle to help prevent wear on the weedstop fabric. (I laid the carpet upside down as I think I'll be able to sweep the back of it. Happily it is white and the reflection should help the plants thrive. Unhappily it is so bright in there that I have to either squint or wear sunglasses!!!!)

The staging has all been washed and returned to the tunnel and I am ready to go now with this season's seed sowing. I will be getting some fresh potting compost this afternoon and will start on the seeds tomorrow.

The new beds need filling and I'm mulling over the options.
Option 1...buy some compost at £35 a bag (huge builders bag) from the council and add my own compost to it.

Option 2.....buy in bags ready made "compost" from the garden centre.

Option 3....buy peat, vermiculite and manure (processed and clean) from the garden centre. I know this uses peat, and will be expensive, but it is the mix recommended by Mel Bartholomew in Square Foot Gardening.

I favour option 3, and will price it up this afternoon. No hurry to do it as I have nothing ready yet to go into the beds.

Had a very productive afternoon indoors yesterday as the weather didn't live up to its promise.

I now have tomatoes, aubergines, peppers and chillis sown. Also some parsnip seeds are pre-germinating on tissue paper (I have read that doing this, then putting the shoots into modules, does away with the uncertainty of parsnip germination and ensures a full row first time......we'll see!)

I also washed and bleached all my old plant labels....this saves buying them again!

And I sat and planned the beds for this coming year.

This is a useful on-line resource with just over 100 members so far. The members have been asked to recruit more members.....so how about it?

Yesterday was lovely weather here on the Isle of Wight and I snatched an hour and a half to start on some of the deep beds in my kitchen garden.

I dug up the last of the Xmas spuds (Charlotte.....planted last July). Four plants worth of spuds. A useful harvest of a quarter bucket. Not fantastic but enough to justify the experiment.

I also pulled the carrots (little round ones...Early French Frame) sown last July. These will be a welcome addition to our dinner tonight. They overwintered well.

There were beets too, and some Mooli radishes. I think they might be bullets now but I believe they stand longer than other radishes so I'll wait to pass judgement til after I have tried them at lunch today.

I tidied both beds and have left them til planting and sowing starts in earnest later in the Spring. I won't start too early as it usually disappoints.

On my afternoon dog walk I strolled through the allotments. There was one very keen plotter taking advantage of the sun to dig. My plot was too soggy but I will soon be able to get on with it. The weeds are beginning to appear so sowing time can't be far off.

My spuds (from Alan Romans) are chitting nicely on the windowsill and I'll put them in at the plot when the chits are an inch long and sturdy.

I also intend to do some in bags again to see if I can master that technique. DH wants me to give up my allotment and just concentrate on the kitchen garden here, but I don't really have enough room for spuds, or fruit, here and am loath to act too soon on his suggestions. If I can master the bag technique then I could have quite a few lined up along the alleyway round the house and satisfy my need to grow them here. We could also put the fruit bushes in with the flower beds.....

There is a new series starting in March on BBC2, fronted by Alys Fowler, on "Edible Gardening". She will be showing how she gardens with veg and flowers together and manages a meal a day from that method. It will be an interesting watch and I'm sure would help me to downsize without really giving up any crops. A new challenge which will require ingenuity but perhaps be more manageable as I get older....

And some may remember me mentioning how thrilled I was to discover that there would be a new show starting this year....called the Edible Garden Show, at Stoneleigh, from 19-21 March. I bought tickets for two days, and booked a non-refundable hotel room, and started getting excited. Then two weeks ago I got an e-mail to say that it has been postponed 'til next year. Major disappointment! As I can't get a refund on the hotel. I will go anyway and visit Ryton Organic Gardens instead. On the way up from here I will also go and explore some of the countryside just north of Bicester where Flora Thompson grew up (that she based "Lark Rise to Candleford" on). These are things I have long wanted to do, so I am not so disappointed about the show.

They said that stallholders were reluctant to come forward due to the recession. I thought that now would have been a very good time for such a Show as almost everyone is talking about growing some vegetables....

I promise to take some photos soon!