Since the last post here I have not been near the allotment. A wedding on Saturday, and a hot Sunday spent recovering.
In the afternoon I listened to Gardeners' Question Time in the tunnel whilst potting up some pinks I got from Thompson and Morgan. They were discussing the water crisis and said it was OK to use a hose to fill watering cans with. That was all the excuse I needed to really get on with watering the whole kitchen garden....so Sunday evening I must have used about 40 cans full all over the back garden, and in the tunnel. It was really dry and the strawberries were either not producing or only producing really, really small berries.
This morning we woke up to rain....! I should have believed the weather forecast! But the last few times they said rain we didn't get it so I thought I'd better water. I suppose I should consider that I have "conditioned" the garden to receive more water and ensured that it didn't run off rather than soak in.
Today I went to Isle of Wight Lavender for a RHS day learning all about Lavender plants. I learnt how to propagate and care for them and all about the different types and the diseases they can get. I had a really good time and must type up my notes on the blog at some point so that I have a permanent record. They fed us well too.
It poured with rain all day....but I couldn't bring myself to moan as I really want the rain. But it made it too dull for it to be worth taking photos....sorry!
For anyone who is interested they are doing another one in July.
Their website is www.lavender.co.uk. But to find out about the tutorial day you would have to go to the RHS website.

Hours at the plot so far.....50 1/2
Went to sow peas and runner beans this afternoon. It was hot, the soil was rock hard, and it wasn't easy to dig and break up the ground. But I managed to sow a row of Kelvedon Wonder peas, and a row of Scarlet Emperor runner beans. I have made a Heath Robinson arrangement for the peas....the criss cross fence...which I hope will support them when they grow. The fencing was laying around on the site so I assumed my plot owners didn't want it. If they do I'll have to do something else.
The runners have an even more Heath Robinson arrangement. I have some bean netting here at home that I will take to support the beans and hope that I can find some more sticks for support. I have time to get some proper canes.
I watered the peas and beans well (under the beans is a trench of manure fetched from the communal pile) and then carted loads of water for the onions and the squashes. I read that onions need water whilst they are growing if the weather is very dry. As the ground is dried out for at least 4 inches, and onions are shallow rooted, I thought they qualified. I will have to do it regularly now I've started!!! 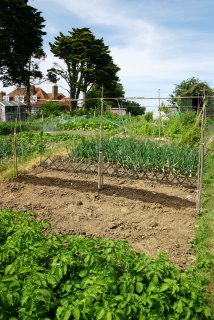 Here is a picture of the state of play when I came home. I have yet to dig the bit nearer to the camera than the watered bit. The early potatoes were here but are now in the fridge!!!!! In fact I am giving a load away as there are far too many for us to use before the next ones are ready! 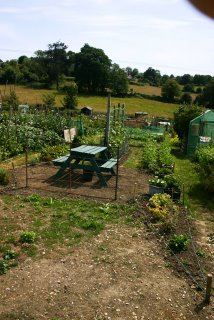 On the way back to the car I thought I'd just update you on the progress on the plot that was taken on only a few weeks ago. Here is a picture of it today...... 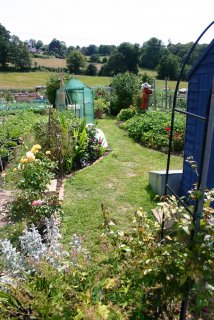 And here is a picture of the plot she has had for 6 years......next door to the new one.


NB. I forgot to say yesterday that the very early potatoes that I harvested were Premiere, and the first earlies were Lady Christl.

Today I went to the plot to harvest the first early spuds. Five rows. It produced 3 Tesco bags full. I had a problem getting them back to the car...should have done two trips. I'm sorry I forgot the camera so couldn't show how well the squashes are doing.
I started digging the cleared bed, to prepare for the next crops and also to find every last spud (daft to think its possible but I have to try!) I also gave the squashes some water....and clipped the grass path on my knees with shears!
When I got home I did a lot of tidying in the kitchen garden...it still looks as though I need to spend at least another week out there. I also moved the composters and mixed up the contents and put them back in for their last heat up. I had to make space for a new one I have ordered on-line....£6...good value I think.
Then after walking the dogs I was worn out and although should have been ironing (pile up to the ceiling!) I zonked out and knitted instead!
To work out what to sow to fill up the space where the spuds were I went all through my seed packets and I was very surprised at what can still be planted out even as late as this in the season. It'll be interesting to see how far behind such crops as runner beans would be if I started some now. Tomorrow I'll put a row in and see. Hopefully we will get some rain (according to Metcheck we are due for some Monday....we'll see. The last two predictions were wrong!) which will help them start growing and will help me with the digging. The ground is almost solid...like concrete. I'm so glad the maincrop are all under plastic....no earthing up or hoeing of weeds to do.
The onions and shallots on the plot are doing really well. Much better than the ones here in my kitchen garden at home. They don't seem to be swelling at all. And the beds are very dry....oh for some rain!

I was away Thursday to Monday in Kent and since then have been catching up with the housework (DH was here on his own with the dogs!!!) , the shopping and the lawns. All done now so I can think about "my" things.
I did walk through the allotments with the dogs yesterday and all looked well. One of the other plotters says I should look to see if my first earlies are ready yet. His are. I'll do it tomorrow....and give the squashes etc a copious watering.
I spent a long time Tuesday doing my front and back lawns....it all looks so much neater now.

In my tunnel the asparagus seeds have germinated and the little plants are 3 inches tall. I'm glad I tried the seeds before buying plants....so much cheaper!

I have small green tomatoes coming on in the tunnel too.

Tomorrow I'll be plotting again! Gotta get my fix!

Just walked through today as I was much too busy to do any work there......unfortunately.

I have a copy of "War Time Allotments Pigs and Poultry" (General Editor Mr. Middleton) which cost 1/- (one shilling....5pence nowadays!) in 1940. On page 72, at the end of the vegetable section are some tips for allotment tenders in those dark days of war....here is one....
"Keep your allotment plot neat and tidy, avoid, if possible, ramshackle huts and heaps of odds and ends or any of the unnecessary items which help to make allotment fields eyesores instead of beauty spots. Keep the plot free from weeds and rubbish; keep the edges trimmed and the paths smart".

Such advice does seem strange today when we think of the ramshackle, make-do-and-mend mentality of allotment holders as part of the charm of allotment society. 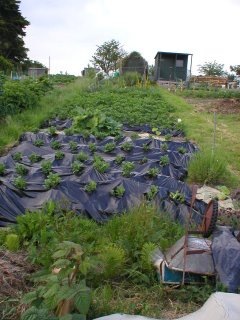 45! This evening I took the opportunity to go and weed the onions and start the earthing up of the potatoes. This picture shows the state of play when I left. You can just see the squashes and pumpkin plants I put in on Saturday..with their rhubarb leaf mulch.


This next picture shows the view from the top of the plot. 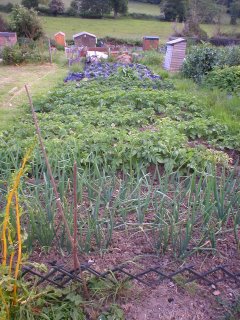 The next picture shows our first real picking of the strawberries from the polytunnel at home. They were very tasty. 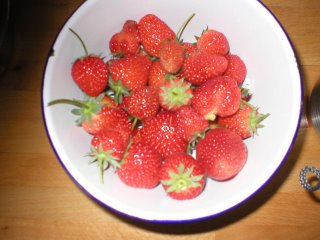 Tomorrow I hope to go back to finish earthing up the potatoes and give the pumpkins etc some more water. I should also begin feeding them I believe. I did plant them with a hefty dose of blended manure, but even so....they'll need feeding soon.

Hours at the plot so far....44 !
At last.....visitors all gone home so I was able to get down the plot and plant my pumpkins and some of the squashes that there wasn't room for in my kitchen garden. It has been too hot here today so I left it til 4pm before I went.
The next door plotholder was there so we had a bit of a natter about potatoes, strawberries, rhubarb leaves, slugs, pigeons.....! Just what I needed....allotment speak!

I had room for a spaghetti squash plant between the lavender bushes. Two Blue Ballet on one side of the rhubarb plot, and a Pumpkin on the other (forgotten its name). I still had one more pumpkin....so I stuck it in the bit of ground retained by the actual plotholders. They haven't put anything in it so I thought I'd help them out!!!!!!!

This morning I weeded the front flowerbed and made room for some bedding plants. As the ones I have raised myself are mostly used up I went to the garden centre and bought some. I got begonias, nicotiana, ageratum and some American marigolds. Tomorrow I will plant them out, along with the 5 lavender plants I bought this week at Isle of Wight Lavender. There is no lavender in this garden....a serious lack which I am remedying. I also have two tiny Lavender "Munstead" that I have grown from seed. If they go an as well as they have done so far I'll have a few plants to fill my longing.

I also moved all the tubs I planted round to the front of the house near the front door. They take away the bareness. It is a longish trek with the watering can, but I have a soil probe which enables me to only water when it is absolutely necessary. (Photo tomorrow....battery ran out!)

At the plot all the potatoes are now through the plastic on the last 5 rows (next door plotter calls them the "coffins"....he has a point!), so tomorrow I need to get down there and tidy up the plastic to coincide with where the plants are growing, and to weed the holes. Also the onions and the potatoes in earth rows need weeding and earthing up again. I managed to find a beautiful Dutch hoe (at IOW Lavender) so the earthing up will be a doddle now!

Yesterday I resurrected the "table top" strawberries. I overwatered the last years ones during the winter and killed most of them I just bought some new ones from Ken Muir...."Chelsea Pensioner"...and also got some Grow Pot Waterers. With them and my probe I should manage the watering better this year and hope for some good strawberries right through until the autumn.

Glad to be back in the saddle at last!