My back feels great (but still stiff so am using it warily) and the weather was blissful....so we took the Mantis and went to the plot to turn over the beds that had manure on, under tarps, all winter. And the bed that was spuds last year. We are now ready to plant this years spuds when the soil settles a little.

It is warming up a lot at the plot and I really must get some carrots sown, and the broad beans transplanted as soon as possible. The most knowledgeable plotter still hasn't sown his parsnips so I have a little while yet before they become urgent.

Forgot to take the camera so no pics today. Tomorrow I'll have a round up photo taking spree here and at the plot to show the state of play and the mountain of work left to do... 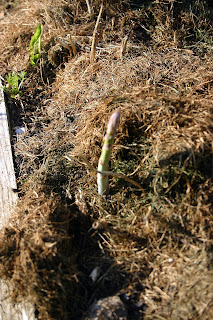 It is 30th March and I have just picked two asparagus spears! This is the first year we can harvest these (crowns 3 years old now.....grown at home from seed). I have never had my own before so I don't know whether this is early or usual.
They are outdoors but mulched well with grass mowings.

They are now picked an will be steamed with our other veg tonight to see just how toothsome they are!

First two spears of many many more.....I hope! 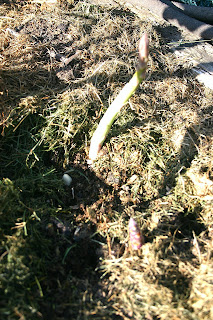 My back is slowly recovering. I have spent some time today clearing up the back garden and DH has mowed. The whole thing looks much more cared for now even though there is still loads to do.
We are hoping for some fine days this week and if we get them we'll go and plant the spuds. Also we could do with sowing some carrots and other roots, and I have some broad beans that I started in rootrainers that really need to go out......perhaps later this week.

I was reading my April issue of Kitchen Garden magazine and they suggest strategies for minimising the attacks from these beasties......
They suggest that we time our sowing, weeding and harvesting to coincide with the lowest levels of carrot fly egg laying and gave this helpful link to the Carrot fly forecast that will be made this year
http://www2.warwick.ac.uk/fac/sci/whri/hdcpestbulletin

So I will definitely be checking in there when the forecasting starts in April..... 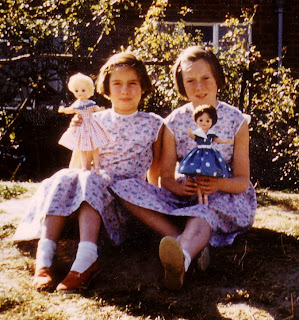 I know this is nothing to do with gardening but Mrs Nesbitt ( http://mrsnesbittsplace.blogspot.com/2009/03/g-is-for-girly-things.html ) posted about her dolls and I couldn't resist showing this photo (I can't do any gardening at the moment....so why not?!!!)

My sister Gillian and I are in the back garden at 4 Manor Road, London Colney, Hertfordshire in summer 1958. We had just been given our new dolls.... Rosebud teenage dolls. Bigger than Sindy dolls; but I don't think Sindys were out just yet although I may be wrong. Mine was called Rosamund....I've forgotten what Gill's was called....Marguerite comes to mind but that may be fanciful.

We lived on a large council estate and loved it. We were there from when it was built in 1952 (I remember clearly the day we moved in although I was only 2.)

Before getting this house we had been living in one room in Napsbury not far away, in the downstairs front room of a semi-detached house. I remember the room with its double bed for Mum and Dad, and three cots for us kids; me, Gillian and Paul, who was born when I was 2 years 3 months old. It was very very crowded.

In 1959 we moved away from here to a house in St Albans that Dad bought (with a mortgage) to get on the property ladder.

In this picture we are wearing dresses that Mum made for us. She used to buy whole bolts of cloth at the market and make our dresses and for our cousin too. So we had a sort of uniform!!! Actually all the dresses (including the gingham ones for school) were made from this simple pattern.....just a bodice, with a gathered skirt, and with bias binding around the neck and armholes. They were buttoned up the back and she sewed all the buttonholes by hand. She was not a skilled seamstress but these were perfectly adequate. This fabric was a lawn, which felt wonderful. These were our best dresses....the rocking horse fabric! I used to sew the hems and hem the binding on with her. I was always pretty useful with a needle, even at that age. When they were let down in length a piece of rick-rack braid was sewn around the worn mark where the old hem was.

She used to do our frocks on a sewing machine that she "won". One day an advertising card dropped through the letter box saying that so many of the postcards that were returned would be entered into a draw for a brand new electric sewing machine. To her immense delight Mum's name was drawn. The machine was a Helvetia and was used from then on to make all the clothes for us girls that she could possibly manage.

Note the haircuts! We always had our hair cut in the week before the new school term (so just three times a year). We had "urchin" cuts at the local Barber's. This was very short, almost like a boy's cut (but they had crewcuts!) and then it grew until the next cut 4 months later. As it got too long we'd wear grips to keep it out of our eyes....! I longed for long hair and plaits but as I was the eldest of what became a family of seven there was no way Mum had time for all that plaiting each day. We just used to run a comb through it and that was that.

Looking back I am so glad we had a "childhood". We had very little in the way of toys compared with kids today, and what we did have merited a special photo! Dad used to go on trips for work. He was a designer who worked for Elliott Automation at Borehamwood, working on the guidance systems and automatic pilots for aircraft, and other technical stuff. He used to have to go to Leeds from Hertfordshire sometimes (to a special packaging firm I seem to recall, although that may have been at Huntingdon.... and something else at Leeds) and the petrol money he was given used to be spent on things for the home like furniture and occasionally on us kids.....as here. Mum still uses the melamine dining room table and chairs which were bought that same year.....goodness!...is it 50 years old now?!!!

Unfortunately I don't still have my doll. When you are the eldest of a lot of kids the toys pass down and are eventually broken and discarded. I have nothing from then except memories and photos....and some small ornaments (two Wade Whimsies ornaments of Disney dogs). This photo of myself and my wonderful sister is a favourite.

I have been smitten!

Getting dressed on Monday morning I put my back out! I have acute muscle spasm and the osteopath says it'll be 10 to 14 days before I can expect any real relief. So gardening activities are at a standstill.......
This is just the wrong time of year for this and I am very very fed up about it..... 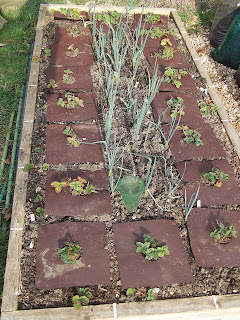 A beautiful afternoon and I'll be away for the next two days so I made sure to have some time with my hands in the soil this afternoon.
I weeded out the strawberry bed and put down the mulch mats. I bet they blow away the first time the wind blows! I put the leeks down the middle of the bed last Autumn because strawberries and leeks go well together according to Companion planting gurus Bob Flowerdew and Gertrud Franck. 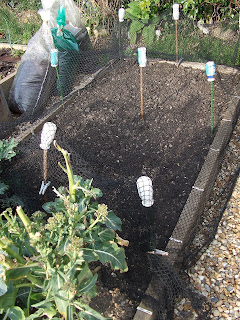 The next bed along which has the broccoli still in it is also clean now, and I sowed spinach.....4 rows..in there. I have covered it up because the cats love newly turned soil.

I sowed the spinach rows 50cm apart going across the bed. I will try to do a mini Gertrud Franck method on this bed this year. The spinach rows become marker rows, and you plant the crops you want in between them. Then the spinach is mostly hoed down to form a mulch to suppress weeds and to keep the soil damp. Further greenstuff is added on top to form "sheet compost" and this should enrich the soil a lot. With this method it should become unnecessary to add manure. We'll see! 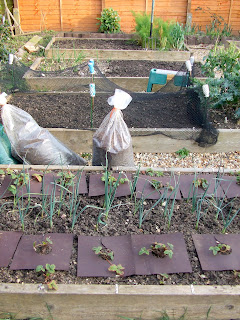 I also cleaned the other two beds along this row. In the distance you can see the bed with the irises in which I will soon be moving to the front garden. They all seem to be alive so I am heartened. It was a very wet winter and I feared they'd rot. There are also a few tiny onions which I grew from seed last year and forgot. I put them in here just to fill the bed up. They seem to be growing so will do for a meal whilst we are waiting for the main crop to come in.

The far bed still has some fennel (now recovered somewhat after the snow and all the deep frosts) and some leeks.

I must get round to spreading some of the manure. I have 8 bags left to spread here....as well as 20 more still full at the plot.