What a Difference a Day Makes!!! 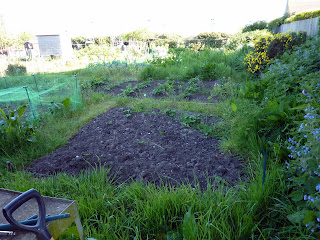 When I went to my plot yesterday for the first time for two weeks (!!!) this was the sight that greeted me. Weeds flourishing in the beds and the paths grown over. The path between my plot and the neighbouring one, was 18" high in grass, and it was a job to get in the shed. 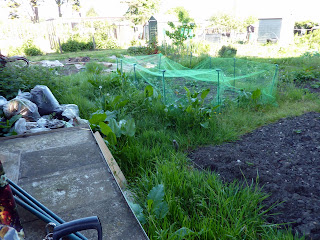 I spent hours weeding the spuds and earthing them up, weeding the cabbages, weeding and tilling the bed for the squashes and pumpkins, weeding and tilling the bed for the carrots and beets. When I had done all that it looked better but not pretty.
Then I heard John, a friendly man who spends a lot of time helping different plotholders, strimming. He seemed to be going from one to another. Aha! I thought. My husband is not well enough for the strimmer at the moment, and I can't start the bally thing, so I asked John if he'd do mine as well for a consideration. He said he would....for a very nominal price (hubby has told me to give him more when I do pay him) but that he couldn't do it until today as he hadn't enough petrol.
I went to the plot after lunch for some rhubarb for gifts, and this is what I saw. An immaculate job. I raked up the worst of it, pulled the rhubarb and am now home to sit in the shade. Very happy with my plot after having been so disappointed yesterday and worried that I'd never catch up. 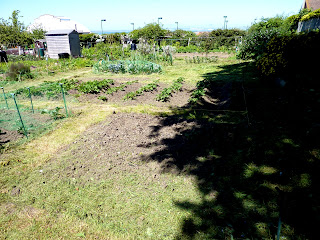 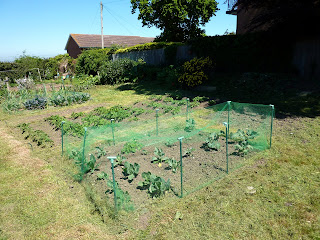 I think I'll be giving up half or even all of the plot this autumn. It is getting too much for me to do as well as the garden at home. But I don't really have enough by just gardening at home. So sharing the plot might work. We are not allowed to sub-let, but the council are turning over the plots to the Parish Council and I am hoping that they will allow me to just keep a half, and supply someone else to have the other half.

My Little Bit of Paradise 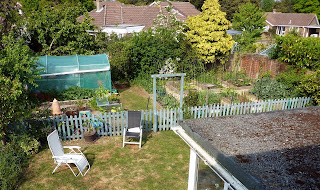 I have spent a lot of time in the Kitchen Garden these last few weeks and thought it time to show it off. There is still a mountain to do but it has come a long way already.