Not much gardening at the moment!

I am not managing to get much gardening done at the moment as we are having a new bathroom fitted. This takes up most of the house, most of the day, and most of my energy.....the fitter starts early and stays late!
Plus.......after he went home yesterday evening I spotted a bulge in our kitchen ceiling....he had knocked a nail into the radiator feed pipe and the leak had filled up the ceiling. So now, after he has finished the bathroom (possibly Friday) he will be coming back at the weekend to replace the kitchen ceiling. This involves removing the undercabinet lighting, emptying and taking down all the wall cupboards, removing the ceiling, replacing the plasterboard, plastering the ceiling, reinstating the wall cupboards, repairing the tiling, replacing the under cabinet lighting, refilling the cupboards, and clearing up. I think he'll be here most of next week! Sighhhhhhh!!!!!!!!!!!!!!!!!!!!!! 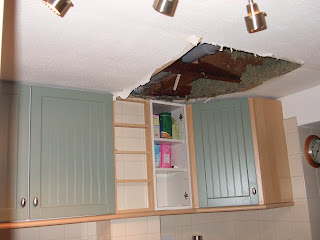 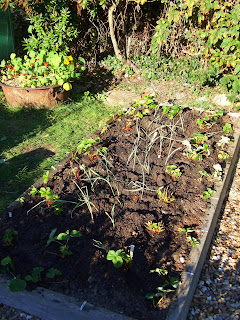 I finished the job I started yesterday and all the strawberry and small leek plants are now in, and watered, and awaiting the rain we are promised for Monday. I trimmed off all the old leaves and the runners, planting a few of the runners round the edge. I'll move them on next Spring...perhaps another row down the middle when the leeks are gone.

There is still an awful lot to do outside and so little time to do it....I shall be at it all winter I suspect!

The leeks are Atlanta at the far end and Tadorna this end. 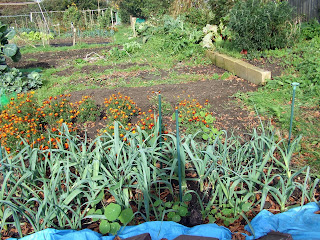 I had to wait at the plot for my manure delivery yesterday so I spent a while tidying up again.

Here you can see the leeks which are doing well, having stopped sulking and taken off at last. Behind them is the carrot bed, now all harvested. I've left the marigolds for a while as they cheer me up. The bed behind that was potatoes and beetroot earlier in the year. I have now cleared and dug it, and sowed broad beans "Aquedulce Claudia". Weed seeds are germinating everywhere so these stand a chance of putting on a bit of growth before the cold weather finally slows things down. 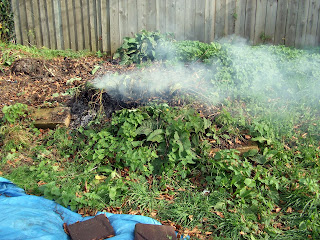 Starting on 1st October we can have bonfires again. DH loves starting them so I let him...then when he went home I fed it the whole afternoon with anything that was rubbish. I had piled up a lot of twiggy stuff all summer waiting for bonfire season. Some of it had rotted down beautifully so I've left all that in situ. This area will be weeded and raked over and piles of compost made and it will be my pumpkin bed next year. The pumpkins will be harvested before I need to have a fire again. 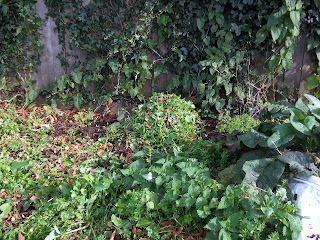 I was pulling up a load of nettles here when I spotted a beautiful yellow toad that I had obviously disturbed. So, feeling sorry for him I have half buried a flower pot, a large black plastic one, and covered it in soil and a heap of weeds. If he takes up residence I guarantee not to disturb him again.
This area is allotted for more Autumn Bliss Raspberries. I want some for freezing next year. The 10 canes I put in two winters ago just about provide enough for us to eat fresh...so more are needed and I have the room. 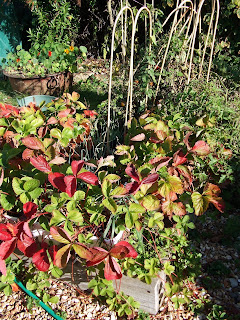 This is the tomato bed from this summer in my kitchen garden at home. They had all collapsed in spite of the bamboo supports (I must do better next year!), and the tomatoes will not continue ripening outside now as the weather is turning after Sunday, so I picked all the green and red tomatoes and pulled up the lot. I moved off the strawberry troughs to reveal the bed.

I spent a couple of hours digging out the bindweed roots, then I manured the whole bed and gave it a sprinkle of lime, and then set to planting out the strawberry plants. I bought these as a special offer at The Chelsea Flower Show form Ken Muir. When they came I had no room for them anywhere so I "held" them all summer in the troughs. There were 18 plants and I have started on planting them in the bed. I've done 12 and will take a picture when they are all in. I have some leeks to put into the bed too as suggested by Gertrude Franck ("Companion Planting; Successful gardening the Organic Way"....long out of print but still one of the best gardening books I own)...they make good companions.

At 3pm I could hardly move, came in for a cuppa.....and that was that! But I had enjoyed what I had done. The afternoon was so very beautiful, warm and wind-free. Tomorrow promises to be fine but more blowy so it won't be quite so pleasant when I am finishing off the job.

I had a chat with the man who delivered the manure (20 bags at the plot, 10 at home.....£30 for the lot!) who was saying that he is getting very much busier with his manure business. This year he has noticed a marked change in veg growing. He has delivered bags of manure to our allotments and to the ones in Cowes for years, and he usually took a few bags to Cowes, as a few old folks there would have a couple or three bags each and that was that. This year a lot of the plots have changed hands and the new tenants have been ordering 20 or 30 sacks each so he has been working hard trying to fulfil them all.

Nearly ready for the winter.... 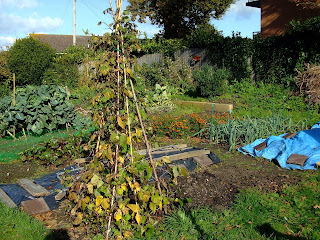 I had not been to the plot for over a week, but we were running out of spuds so I had to go and dig some up. I stayed for two hours and continued the tidy up.

There were loads of beans still on the Cosse Violette on the poles here so I took them all. There are still flowers so I left them to see what will come of them.
The Borlotti beans which were on another tepee in the same bed were over so I harvested a huge bag of them and took down and composted the bines.

The Brussels were all falling over so I re-staked them, took away the big net, took off all the dead leaves, firmed them all into the ground again....and picked a few that were ready. Some of the sprouts have "blown" so I looked up the problem and followed the advice. Next year I'll put them further apart because that apparently helps. (I always put stuff too close together...a personal hang-up of mine. Putting tiny plants two feet apart just looks so lonely!!) The little cabbage stalks that I cut a cross into have produced some tasty greens which we sampled yesterday evening. 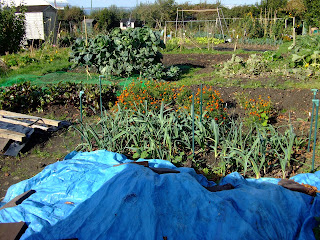 I also dug up the last of the carrots...mainly round ones...Permex. A few had been attacked by fly but most were good. I'll leave the marigolds for a while as they are so pretty.
The courgettes are almost over. One had succumbed to the chilly night weather, so I pulled that up. The other two are still performing so they are staying there for now. I want that bed for broad beans so they haven't got long....
The raspberries had a last pick....and produced a half cup.

When I can get back to the plot (we are having a new bathroom fitted soon and I'm busy taking tiles off etc at the moment) I have to do some sorting at the far end of the bank area. The comfrey there needs cutting and the whole area cleaned for the winter. The comfrey is grown purely for the compost heap and for mulch.

I also need to give attention to the pathways between the beds as the grass is returning with a vengeance. I'm tempted to weed killer them but won't as I am trying to keep the plot organic. (The silly mistake when I sprayed the broadbeans with weedkiller instead of bug spray last year was an aberration!!)

I've been making chutney at home with windfall apples and our pear glut. I also need to do some green tomato chutney, and to pickle the beetroot which will soon be big enough to do. We like the baby ones rather than sliced big ones.

I spent a couple of mornings in the tunnel this week clearing the beds and re-jigging the irrigation. I will be sowing some salads in there soon for over the winter. We tend to have soup rather than salad for lunch in winter but do have the odd salad so I like to have some ready. It seems to grow slowly, and stand a long time over the winter in the tunnel without going to seed, so a few rows are worth the effort.

Monday promises to be nice weather so I'm hoping to spend a few hours at the plot then. I also need to do quite a bit in my front garden. We will be having the drive widened, and a path laid to get to the back gate. When that is done I am going to remodel what is left. Winter is the perfect time to do it as the soil there is far too dry to dig in summer....like concrete.